The Motorola Triumph MOTWX435KT is a highly anticipated Android SmartPhone for the Virgin Mobile network. This high anticipation is due to this camera phone being the first high-end Android phone on Virgin Mobile's no-contract Beyond Talk plan with unlimited data. Off the shelf, this phone runs the Android 2.2.2 operating system. This article focuses on the camera and camcorder aspect of this high-end camera phone. 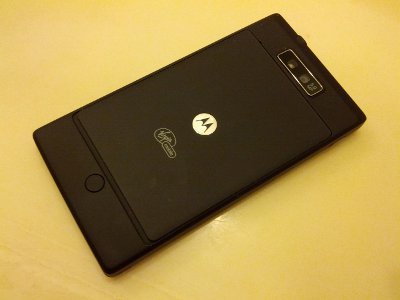 The Motorola Triumph comes in a nice box with Virgin Mobile branding. The box cover can be flipped open to see the sleek looking phone. Upon opening the box, I discover the SmartPhone, a battery, a 2 GB microSD Card, a microSD Card adapter, a micro-USB cable, an AC charger, and instructions for activating the phone on the Virgin Mobile network.

Under the battery cover, the label shows, "MADE IN CHINA". However, in our hands, the phone feels extremely solid, despite how thin it is compared to other SmartPhones. The weight also feels rather hefty (143 g). Short of the glass panel for the LCD and the camera lenses, the entire phone is covered in a rubbery plastic with a non-slip grip. The large 4.1 inches screen (480 x 800 pixels resolution) is recessed slightly from the rubbery surround. Therefore, you can place the phone face down on a table without scratching the glass. All of these traits gives the user the perception and confidence in this top-of-the-line camera phone. 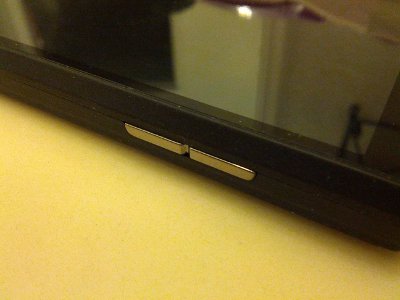 Booting up the phone is no joke. Unlike the Samsung Intercept Android phone, which takes an eternity to boot, the Motorola Triumph boots to the lock screen in seconds. We wonder if it is the more powerful SnapDragon CPU or if the Android 2.2.2 operating system has been optimized. 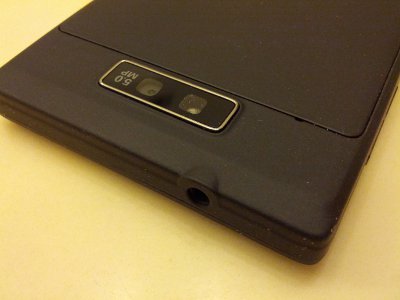 This camera support a zoom range between 1x and 4x. It is likely that the camera uses digital zoom rather than optical zoom. If you double-tap the screen, it toggles between 1x and 4x zoom. To use other values, you'll have to use the settings menu. See "Camera Settings" below.

The camera has an ability to turn off the shutter sound, which is great for discreet situations. However, you have to be careful with the auto-focus, which still provides an audible focus achieved indication. In order to avoid this audible alert, tap the shutter button quickly, without keeping your finger on the button. When you do, it auto-focuses on the center of the camera, then snaps a photo when focus is achieved. Not too useful when you want a well composed photograph, but if you just want to capture something discreetly, it functions well.

If you "touch focus" anywhere within the frame, it will produce an audible chime on focus achieve. If you keep you finger on the shutter button, it will make an audio chime upon focus achieve, and snap a photo when you let go of the button. What this camera needs is a way to disable the AF sound as well.

The Motorola Triumph comes with a dedicated camcorder app so that you can launch it immediately from your home screen. There is less opportunity lost when you launch it directly, versus launching the camera app, then switching to camcorder.

A 2GB microSD Card is included with the phone; at least the Virgin Mobile version of this phone. That's plenty of storage space for the camera and the camcorder.

The Motorola Triumph uses the Motorola FB0-2 battery pack. It's a 3.7v Lithium Ion battery that is rated at 1380 mAh (5.1 Wh). Not that it really matters too much, but in case you are wondering: "CELL ORIGIN JAPAN FINISHED IN CHINA".

Charging is done via the micro-USB port with the include USB cable. This cable can be plugged into your computer or plugged into the included AC adapter for charging the phone. Much like the Samsung Intercept, the phone can be fully charged in about four or five hours.

The external casing of the Motorola Triumph is really clean and simple. It only has three buttons (power, volume up, and volume down) and three ports (3.5mm audio jack, micro-HDMI port, and microUSB port). 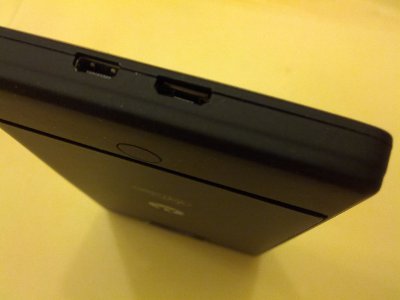 Sadly, audio mic/headphones and micro-HDMI cable are not included in the package.