But when you start out on Instagram, you have no followers. How do you get exposure? One very efficient way is with Instagram hash tags. A hash tag is a single word with no space or symbol in it, proceeded by a hash mark ('#'). For example: #photography.

To prevent hash tag spamming, Instagram added several rules (mechanics) for hash tagging. The well know spoken rule is that you can associate a maximum of 30 hash tags to a single photograph. But there are several other non-spoken mechanics with regards to hash tags that we will talk about below.

2. You can rotate your hash tags out to add new hash tags. For example, if you add #instamood to a photograph, you can remove the comment containing it and add a new comment with a new hash tag later. 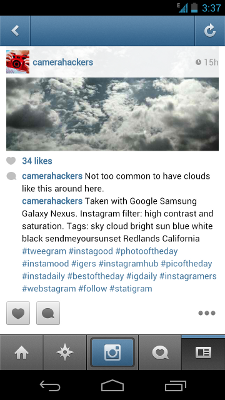 3. Once you remove a hash tag from a photograph, it will no longer show up when people search for that hash tag.

4. Once a hash tag has been applied to a photograph, Instagram remembers when the hash tag was applied. Therefore, if you remove the hash tag and re-apply the hash tag to the same photograph, it will show up in the same position that it was in the list (it won't show up as the most recent photo under that tag).

Knowing these Instagram hash tag rules, we can come up with some strategy that maximize a photograph's exposure.

2. If you have more than thirty hash tags for your photograph and need to rotate them, use the most popular hash tags first. They will quickly scroll off the list when other photographs are added. When that happens, it's time to rotate in the less common hash tags