Older Revision of DivX and MP3 Codecs for Ubuntu

DivX and MP3 Codecs for Ubuntu

When I make home videos for distribution on the web, I tend to use Microsoft Windows Movie Maker to edit the segment I want to distribute and export it to DV. Then I would load up the video segment in VirtualDub for post-processing, such as deinterlace, level, brightness/contrast, saturation, resize, etc. Finally, I'd export to XviD/MP3 format; the video portion will be encoded in XviD (similar and playable using the DivX codec), while the audio portion will be encoded in MP3. The DivX/MP3 format seems to provide the best quality and the smallest file size ratio for now.

My video process work-flow usually involves a Windows notebook PC. But I have several Linux computers around my home running various flavors of Ubuntu. My favorite right now is Ubuntu 7.04.

Last night, I made two video segments from my friend's wedding the day before. I encoded them into the DivX/MP3 format. But I moved to my living room computer (so I can watch TV with my wife) running Ubuntu to process the photos. I double clicked on the videos I made, which started Totem Movie Player automatically. Unfortunately it couldn't play the video because the DivX and MP3 codecs aren't installed. But through this process, I found out how easy it is to install these codecs so that you can watch DivX videos and MP3 audios on Ubuntu.

And I'll show you how in this wiki document. After you follow the procedures in this document, you will also be able to play the following formats on your Linux computer: AAC, AC-3, ASF, FAAD, MPEG-1, MPEG-2, MPEG-4, SID, WMV, and unencrypted DVD.

The easiest way to install these codecs is to simply double-click (opening) a DivX video that you've made. If you don't have one handy, you can also find them online. I'll make a sample one for you to click on in the future.

Once you do, Totem Movie Player will start and report that it can't find the codec to play your movie file. It will ask whether to look for the codec to install. Answer favorably for it to do its work. After searching, it will present the following screen to you. 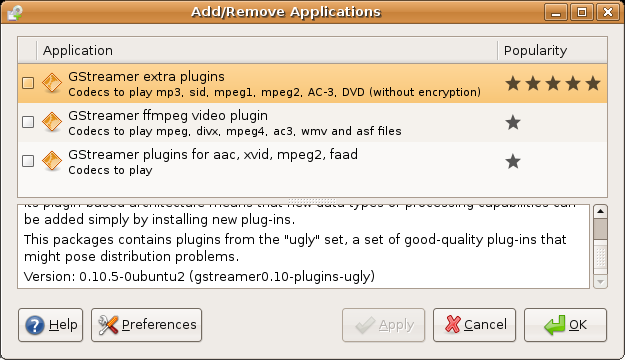 Check all three boxes to install all three packages. These packages contain the codecs you need. You will be presented with the "Restricted Software" dialog box (shown below). Click "OK" to accept. 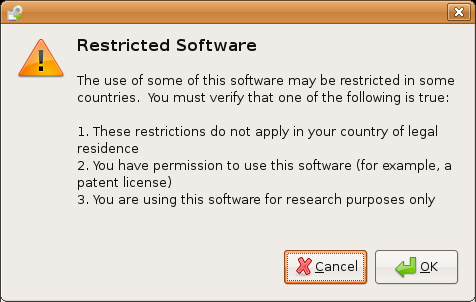 Totem Movie Player will instruct Ubuntu to install those packages automatically. When installation is complete, you will be able to play DivX movies just fine.

If you are comfortable with the UNIX command-line interface, you can also install these codecs manually. Simply type in the following commands in order and the codec packages will be installed.