If you have already pre-ordered the Hacking Digital Cameras book, don't be surprised to see a second name on the cover when you get it. The second name, Auri Rahimzadeh, is my co-author for this book. Auri is not new to being an author. He has written Greek My Ride : Build the Ultimate Tech Rod, which was released April 22, 2005 by ExtremeTech.

I am a great fan of racing and hopping up my cars. And for rally, my racing of choice, it's common to install navigation computers and accelerometers in our cars. Auri's Geek My Ride book presents numerous concepts and techniques on getting your electronic gadgets into your cars. It's a refreshing to see a car book on electronics modifications rather than the typical books on engine, suspension, and go fast mods. When you want a break from hacking cameras, be sure to check out his book and try hacking your automobile.

For my Hacking Digital Cameras book, Auri wrote three, out of thirty, chapters and has came up with a few nifty hacks of his own. One cool Auri hack you will see in the book is how to mount a web cam on you bicycle, which feeds a digital video recorder in your backpack. Imagine being able to bike down an adventurous, bumpy mountainside and recording everything along the way. 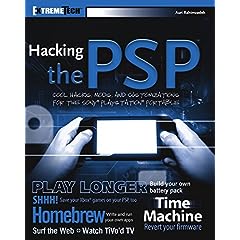 Auri is non-stop! After completing his Geek My Ride book, he proceeded to helping us write several chapters in the Hacking Digital Cameras book. Now, I've heard that he is working on a new book called Hacking the PSP. Hacking the PSP Contains numerous hacks, modifications, and work-around for the Sony PlayStation Portable.

Hacking the PSP is due for release in January 16, 2006. But you can get in line by pre-ordering it from various online booksellers, such as Amazon.

Did your message disappear? Read the Forums FAQ.

TrackBack only accepted from WebSite-X Suite web sites. Do not submit TrackBacks from other sites.

Title: Cool PSP Hacks
Weblog: GearHack
Excerpt: I was up early today, trying to do some work. But an interesting ad got me surfing to G4 - videogame tv web site. I found a fun Lego Star Wars - Revenge Of The Sith video to watch. But what's more interesting to you is the Cool PSP Hacks video. It's interesting how they explained the hack through . . .
Tracked: Tue, 25 Oct 2005 11:51:15 -0700